They say the Camino provides. And so it does.

The morning started out not quite as magical as the others. The skies were a little hazy and the air a little warm. That quickly changed after we noticed my headlamp flickering. This went on for about an hour before we realized that, yes, that was actually lightning! We made an early stop for first coffee to move our rain gear to the top and check the forecast. The café owner said it should stay to the north, and Carlos and Antonio cruised by and said the same, so we headed out, now fueled by an electrical charge and a double-shot.

The lightning offered a mystical sense to the twilight morning as we walked under sparse canopy with flickers snapping through to the trail.

Over the next hour there was another pilgrim just ahead of us, keeping our caffeinated pace (about 3.5 mph). He took a wrong turn around sunrise, and we called him back. And that’s when we met Raphael. Raphael is hiking for a little over two weeks before he returns to study law at a university in Berlin. He started on the Camino Norté route, and then bussed south a bit to be able to complete the last 100 km before he needs to head back. Bright, pleasant, funny, easy going and a good conversationalist, we would end up hiking with him for the rest of the day.

At second coffee, we caught up with Babu! Babu is an Indian gentleman we first met in Astorga. Or rather, he met Sully with a few rounds of fist bumps (Sully would stand in the hallway and hit up anyone passing by. And if at first they did not see his 2-foot high fist, he would just follow them into the restroom – which was directly across the hall and where most pilgrims were headed.) When we caught up with Babu in the next mountain town, he confessed he felt guilty for only acknowledging Sully in the albergue and invited us to share a drink with him. We love Babu’s dry sense of humor and the easy way he interacts with Sully. There is also this wisdom about him you just want to soak in.

Of course, Carlos and Antonio also came by … they had been inspired by our final push and decided to head to Santiago today!

And there you have the rest of our day’s hike. Raphael, Babu, Carlos, Antonio, Guy, Sully and I flowed in and out of step and conversation with each other. The miles flew by. Fellow pilgrim Sullivan said one day, “You can hike the Camino faster by yourself, but you will hike farther with friends.” He could not have been more right. Today’s 24 miles were a breeze.

We left Babu and Raphael at the town before Santiago (they were waiting until tomorrow for the final trek.) Already the two were quick friends – Babu was referring to Raphael as his “Siri” with all of the directions and answers at his fingertips. And Carlos and Antonio passed us just outside of Santiago as we took a quick break of beer and pizzas.

Arriving in Santiago is as dramatic as you would think. The cathedral darts in and out of view until you reach a steady stream of pilgrims and have no doubt you are on the right path. One final passage way with bagpipes bringing you in, and then there you are – a plaza filled with celebrating pereginos, the church towering above. 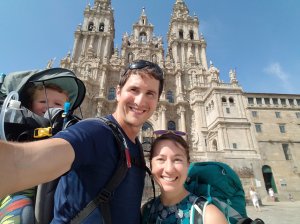 The natural inclination of the pilgrim upon reaching the resting place of Saint James is to hug, take photos, wander briefly around the square and then to lay down on the stone plaza and let it all sink in. We did not fight it. It was the perfect end to the walk. So perfect that I nearly forgot to mention Sully’s final blowout as we arrived at the plaza. We would have blocked it out entirely except that Guy suggested we document the moment! 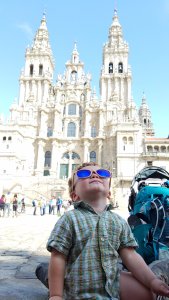 After a rest at the cathedral, we headed to the tourism office for our compostela – the final certificate of completion. The line was 100 meters long with the wait a good hour. There was no way Sully was tolerating it. Fortunately, an employee from the groups office took pity on me as I tried to wrangle Sully from the water fountain and figure out what to do. He asked how many in our party, and I said three, and before I knew it, I was filling out our group paperwork, turning it in, and he was reappearing to ask if we would like Sullivan’s name on our certificates (he is too young to get his own.) And just like that we had two compostelas and directions to our hotel.

After showers and a nap, we headed out to find dinner. We hadn’t made it far before we found a musician in the street, and Sully instigated a dance party. We were cheering him on as he danced with a little señiorita when who should find us but our New Zealand friends, Sandy, Jo and Johnathan! We were beyond thrilled – we really wanted to see them before we left, but they were a full day ahead. However, the Camino has it ways, and we were able to spend the rest of the evening with them, celebrating our time on the trail as well as Sandy’s birthday. It was a magical night full of hugs and laughter. Sully was a champ, holding it together until 11 PM, when we finally made it to bed. (It helps that the Kiwis are brilliant with kiddos.) We could not have asked for a better way to wrap up our day and our grand adventure.

Tomorrow, we take it easy. Shop for souvenirs, go to the pilgrims’ mass and rest up for the long journey home.